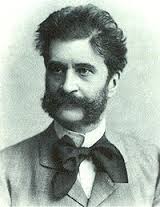 Johann Strauss II ( Johann Strauss, Jr: October 25, 1825 – June 3, 1899), “The Waltz King”, was an Austrian composer of light music, in particular the dance music and operettas.  He composed over 400 waltzes, polkas, quadrilles, and other types of dance music, as well as several operettas and a ballet.  He was responsible for the popularity of the waltz in Vienna during the 19th century.